With Essen 2016 only a week away, I figured it would probably be a good idea to jump on the bandwagon and shout about some of the stuff that I’m excited about that’ll be released at this year’s event. As ever, because I seem to be evolving into some kind of gaming hipster, I wanted to focus (at least partially) on some of the smaller, more curious releases that will be available in Germany.

For those of you who fear videos, here’s the list in full. This is in publisher name order, not Official Michael Excitement Index order, by the way… I’m equally primed and ready for each one the same.

Of course, I’ve not listed a LOT of stuff here – there are over 1000 new releases planned for this year’s show, so there’s no way I can hit everything. However, keep an eye on the site, on the YouTube channel and my Twitter for the latest news from Germany – you can be sure there’ll be a few weird and wonderful things that we’ll be reporting on!

Hey everyone – I’m trying a new segment for The Score over on the Little Metal Television YouTube channel where I’ll be running down some of the best (and occasionally the worst, if warranted) games that I’ve played over the last week. It’s called The Monday Rundown, and I’ll aim to always keep it bite size yet (reasonably) informative. Here’s the first episode – I’d love to hear your thoughts on it!

Thanks as ever for the support – hope you enjoy it!

Hey folks! Now that I’m back from Ohio I’ve had plenty of time to finish off the remaining videos from Origins 2016. Thank you to all the folks who took time out at the show to speak with me, and thank to all of you lot for watching the videos over on The Little Metal Television channel on YouTube. Of course, if you like them, clicking the Subscribe channel is a lovely thing. Here’s the second and final batch from the show floor!

Hey folks! I’m currently in Columbus, Ohio for my first visit to Origins Game Fair 2016, and I’ve been busy speaking to all and sundry about a lot of the awesome games that are both here and coming soon. Productivity has reigned supreme, and rather than waiting until the whole show is done to post videos, I’ve been editing and uploading them already! Here’s the first batch for you to check out, and don’t forget to subscribe to the Little Metal Television channel for more coverage from this year’s convention circuit! 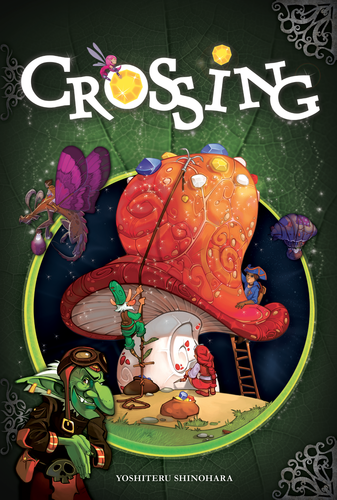 If you look back over recent reviews here on The Little Metal Dog Show, you’ll see that things have taken something of a lighter tone – work is crazy busy, and there’s always a lot going on, so finding the time to settle in for four hours of something like Through The Ages is a rare occurrence. Thankfully there are many great games out there that offer an interesting play experience in a much shorter period of time, and I’ve found that my shelves grow increasingly heavy with these small boxes. Sure, I still love a deep, multi-hour game, but quick playtimes can often be fun too. Enter Crossing from Asmodee, a game packled with bluff and potential cruelty wrapped up in a cutesy package that’s perfect for family game night.

It’s a very daft world we find ourselves in, with various fantastical races battling for control of mystical gems. Each player represents the leader of one of the groups, and play begins with the placing of special mushroom tiles in the middle of the table. These need to easily accessible to everyone and there will always be one less tile than there are players – so, should you have the maximum six people sat around the table, there’ll be five mushrooms in the centre.

Before you begin, each tile is then stocked with two random gems taken from the included bag – there are sixty in there, and the game ends on the round when the last ones are removed. Gems will score you points at the end of the game. Red, Blue and Yellow ones will get a single point apiece, but a set of each of the three will be traded in for five points at the end of the game. The White gems score two points for every one collected. But how do you get them?

Such shiny stuff. So cute to look at. And so much potential for anger and rage…

Well… pointing, mainly. Lots of pointing. For the first round, the players count to three, and on three everyone must point to one of the mushrooms. If you’re the only person pointing at one of the tiles, congratulations! You claim the gems for your own and place them on your character’s tile, gloating with the knowledge of being a unique and special person. If you happened to choose a mushroom that someone else also selected, you’re out of luck; no gems for you this turn. That’s not necessarily a bad thing though.

You see, when the round ends, more gems are drawn from the bag. An empty mushroom gains two, just like the start of the game. However, any central tile that already had gems on it gains an extra one from the bag, and these can quickly stock up, becoming more and more alluring at the game continues. From the second round onwards, players also have a couple of extra options, by way of pointing at an opponent’s tile to steal an entire stash and boost their own, or cover their collected booty and hide it away, protected from thieves for the rest of the game. Choosing this option sees you sit out of the next round though, leaving the available mushrooms open for braver (or more reckless) players.

So far, so simple, but there’s another level to Crossing that elevates it above simply collecting shiny tokens. In this game, table talk isn’t just allowed, it’s positively encouraged, meaning that deals and promises can be made at any time. That doesn’t mean that you have to stick to what you’ve agreed with other players, though. In fact, the game truly comes into its own when you pick your battles, forming useful alliances at just the right time and then stabbing your now quite annoyed friends in the back, just so you can get your hands on a few valuable gems. The extra points that you get from collecting a set of Blue, Red and Yellow gems can be well worth a couple of rounds of working together, only to see this alliance crumble when you steal the stuff you’ve ‘helped’ them accrue over the last five minutes.

Crossing hits that same mark as the excellent Skull (aka Skull and Roses) for me – light enough to explain to newcomers in a couple of minutes, but with just enough meat on the bones to warrant multiple plays in the same evening. It has the same twin markers of bluff and deception built into its DNA, and playing regularly with the same people will see them develop tells that you’ll find yourself constantly looking out for. Keeping an eye on what gems folks have already collected will prove constantly useful, as this is as much as game of awareness as it is reaction – a swift eye between rounds is as vital as a quick hand switching from one tile to another when you spot someone else going for it.

While there’s not a massive amount of stuff in the box, what is in there is nicely put together. The art is pretty throughout, the rulebook clear and concise, and the tiles are thick so they’ll last through plenty of poking and prodding – just what you’d expect from Asmodee, who are putting out a string of beautifully produced games over these past couple of years. My only issues are that playing requires a minimum of three players, and with six around the table the whole thing can be over before you even feel like you got started – however, with four or five, it’s an ideal end of the night palette cleanser that shows a darker side than you may initially expect.

Crossing was designed by Yoshiteru Shinohara (and is only his second game, according to BGG). It was released by Asmodee in 2016, though was originally self published under the name of Xing back in 2013. Between three and six people can play, with games taking around fifteen minutes or so. It’s on sale from the good folks at Funagain Games for $25 and is well worth checking out.